DVD/Blu-ray: Jack O'Connell a raw force to be reckoned with in tough prison drama "Starred Up" 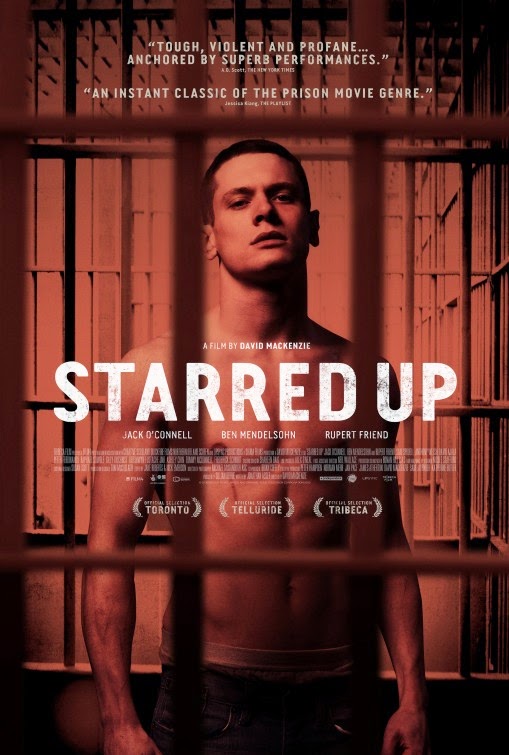 Director David Mackenzie (2011's "Perfect Sense") and first-time screenwriter Jonathan Asser don't explore their  tough-as-nails characters and their histories as deeply as they could have, but that doesn't stop British prison drama "Starred Up" from being hard, profane and persuasive. With thuggish swagger and a hair-trigger temper, violent 19-year-old offender Eric Love (Jack O'Connell) is transferred to a maximum security prison from a juvenile detention facility for being "starred up," which is U.K. terminology for his behavior being severe enough to land him in confinement. After an incident that isn't fully his fault but just part of an impulse, he receives rehabilitation from the institution's therapist, Oliver (Rupert Friend). It certainly doesn't help matters that Eric has so much aggression in him, but it must have come from somewhere, like his father, Neville (Ben Mendelsohn), also one of the prisoners who keeps intimidating his own son.

Matching the feral unpredictability of Tom Hardy in "Bronson," 24-year-old up-and-comer Jack O'Connell (2014's "Unbroken") is a startling, intensely raw force to be reckoned with as Eric, an arrogant and volatile punk. Ben Mendelsohn, one of the best-kept secrets as character actors go (he can be seen in 2012's "Killing Them Softly" and 2013's "The Place Beyond the Pines"), is no slouch in commanding the screen as Neville, who's manipulative and refuses to show any tender love to his son. Rupert Friend is also notable as Oliver, the sympathetic prison's volunteer therapist who insists he can help Eric with managing his anger in group sessions. For a while, the viewer wonders where most of this is going, the enfant terrible instigating or being one-half of a physical fight. Before it grows teeth-grindingly tense and nearly ends as a Greek tragedy, the film bares its wounded humanity and hits a touching, but still honest, note. The film is shot almost entirely within the confines of a prison, but Michael McDonough's handling of interiors captures the claustrophobia of what imprisonment most likely feels like. The major takeaway of "Starred Up" is that O'Connell's star-making, watchably electric breakout cannot be ignored.