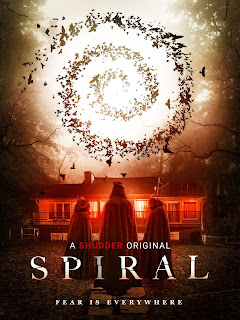 “Spiral” is “Get Out” for the queer experience. Despite that reductive concept, the film does deliver on its creepy, thematically provocative premise, evil being chameleonic—well, kind of—in a heteronormative town that may or may not welcome outsiders. This time, the outsiders are a biracial gay couple. Director Kurtis David Harder and writers Colin Minihan (2018’s “What Keeps You Alive”) and John Poliquin dare to exploit the fear of the “other” in a paranoid horror yarn about sinister intentions behind apparent social progress. “Spiral” ends up being more effective in its setups than payoffs, which run the gamut from ruthlessly twisted to silly, but it still has something more on its mind.

For a new beginning in 1995, writer Malik (Jeffrey Bowyer Chapman) and his slightly older partner Aaron (Ari Cohen), along with Aaron’s 15-year-old daughter Kayla (Jennifer Laporte) from a previous marriage, move to a small suburban town of Rusty Creek. Their smiling neighbors, married couple Tiffany (Chandra West) and Marshal (Lochlyn Munro), seem to be personable and progressive enough. “We don’t have any of you in town,” Tiffany says before she thinks, while handing the couple a housewarming plant. Malik is the first to catch on, seeing right through the people in town. Quite literally, he sees right through the window of another house, where a group of people seem to be performing a ritual one night. Coupled with his own trauma from a past homophobic incident and the discovery of a ritualistic cycle every decade, Malik will have to act fast to protect himself and his family from becoming the next targets.

Opening on a wintry night in 1983 with a memory that would induce trauma for our protagonist, “Spiral” presents a real-world social horror. A teenage Malik and his boyfriend are making out in a car, only for their secret passion to be interrupted by a violent hate crime. The imagery that the film returns to is more haunting than most of the supernatural visions Malik begins experiencing. The film is specifically set in 1995, and for good reason, yet still timely for 2020. From the ‘90s to now, the TVs have gotten less boxy and the computers have gotten more compact, but we still have a ways to go in terms of tolerance. At one point in Malik’s car, the radio plays Pat Buchanan’s “Culture War” speech regarding President Bill Clinton signing an Executive Order to prohibit discrimination based on sexual orientation.

Jeffrey Bowyer Chapman (TV’s “UnREAL”) is an emotionally true and reliable guide, until he’s not, conveying a splintered, paranoid psyche well as everything around him comes crashing down. Before that, though, Chapman poignantly shares a bit of wisdom with Kayla, as if she were his own daughter (he endearingly calls her “Booger”): “Choosing to live your life loud and proud is about the bravest thing in this world.” As the film goes along, it is heartbreaking to see Malik step further and further away from what he used to believe in, knowing that the world can be too dangerous and narrow-minded to draw attention to oneself.

“Spiral” is moodily photographed and dread-inducing, while also having enough to discuss beyond empty chills. An off-center mood does keep us guessing as to whether something wicked is legitimately afoot or just imagined through Malik’s own psychological unraveling (and there’s a spiral motif that is sometimes subtle). There are a couple of good scares, one involving an elderly neighbor who tries warning Malik at night, and a single shot of a man at the end of a bridge is eerie enough to send a chill. Representation in the horror genre is always welcome, not only having an openly gay actor of color as the leading man but also baking resonant ideas into the story without being too heavy-handed. As hopeless as things can feel in “Spiral,” what lands with the most punch is how hope cannot be silenced.
Grade: B -
Shudder premieres "Spiral" (87 min.) on their premium streaming service on September 17, 2020.