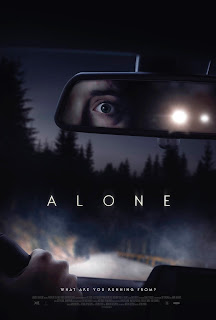 Stripped down to the bare necessities—a woman, a man, and a stretch of road—“Alone” milks its narrative simplicity for all it's worth as a primal survival thriller. What might seem like a generic variation on “Duel” or “The Hitcher” at first, the film is actually a remake of 2011’s Swedish film “Gone” (also written by screenwriter Mattias Olsson). Much like Mike Flanagan’s 2016 nerve-shredder “Hush,” there is less chance of safety when one is all alone, and someone hunting to kill you just because they can is far more frightening than any long, drawn-out motive. Lulling us into a real-time nightmare with a hyper-focused proficiency by director John Hyams, “Alone” remains taut the whole way through.

As a way of coping with the suicide of her husband, Jessica Swanson (Jules Willcox) packs up her Portland life and gets on the road, towing her U-haul trailer. On the road, she passes a slow-moving jeep that then speeds up, endangering both of them when an incoming truck barrels toward them. The next morning after staying at a hotel, Jessica is about to get back on the road when a man (Marc Menchaca), the driver of the jeep, bangs on her window to apologize for the incident. Jessica rolls down her window just enough and keeps the conversation brief, only to run into the man once again on a winding road, where he seems to be having car trouble. Jessica remains instinctual and guarded about “stranger danger,” but this male hunter will not give up, and neither will Jessica even after she is kidnapped.

“Alone” sets up characterization pretty efficiently, as director John Hyams pulls into focus that Jessica is grieving over a tragedy and not a mere break-up. Divided into five sequences with seemingly weighty, if mostly superfluous, chapter headings (i.e. “The Road,” “The River,” “The Rain”), the film is most effective in its first half. Being alone with Jessica on the road builds to a series of stressful and scarily plausible encounters at rest stops and side roads. The middle section, in which Jessica has been kidnapped and plans her escape from her captor’s basement, feels a little more routine, but what follows becomes just as tense and brutally satisfying.

Casting two actors who are not recognizable stars allows the gripping spell to never break for this situational thriller. Jules Willcox, resembling Carrie-Anne Moss, gets put through the physical and emotional wringer. Even before Jessica must become resourceful, Willcox gives the character a solid head on her shoulders, behaving as any woman might if driving on a road trip by herself, and brings a poignancy to how her loss has impacted her. With a handlebar mustache upping the menace and sleaze factor, character actor Marc Menchaca is a sinister presence without hamming up the role (only credited as “The Man”); his chilling monologue will certainly make the viewer crack because it wakes up something in Jessica. The only other fleeting participant in this scenario is an actual hunter named Robert (Anthony Heald), whom Jessica turns to for help as she’s running and hiding from her predator, and Heald makes enough an impression as a Good Samaritan who certainly doesn't deserve such a cruel end.

There isn’t a lot of time for depth, nor does the film resonate as deeply as it could have, but “Alone” doesn’t really require any padding when it creates sufficient tension through the film’s minimalism. All along, cinematographer Federico Verardi brings a cinematic polish to every frame, shooting the heck out of the gorgeous Pacific Northwest while eventually making the wilderness feel like an isolated, atmospheric playground for this game of cat and mouse. The terror feels real, above all, and Jessica receives a catharsis just in the nick of time.