Attack of the Pouffes!: "Save Yourselves!" a likable lo-fi hipster version of an alien-invasion blockbuster 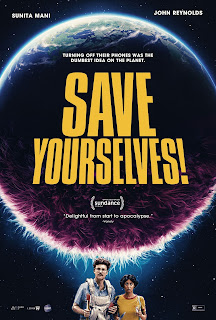 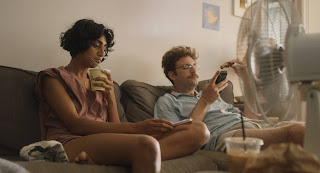 What if sleeping through your morning alarm and missing work was like turning off your phone and missing the end of the world? Sure, the stakes are a little higher. “Save Yourselves!” is the lo-fi hipster version of an alien-invasion blockbuster if we were to spend time with a couple blissfully unaware that there was an invasion. Written and directed by real-life couple Alex H. Fischer and Eleanor Wilson, this likably droll post-mumblecore effort graduates to full apocalyptic relationship comedy status with a witty script and two delightful lead performances from John Reynolds (2020’s “Horse Girl”) and Sunita Mani (2019’s “Wine Country”). Not only does “Save Yourselves!” comment on how we can barely function technology-free with dead-on truth, but it turns seemingly adorable pouffe critters into ethanol-drinking, tongue-shooting alien monsters! 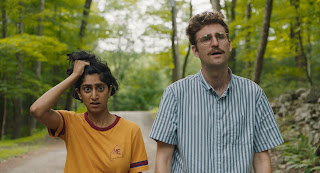 Jack (John Reynolds) and Su (Sunita Mani) are a Brooklyn couple, both prisoners to scrolling on their phones and answering social media notifications. Starting to feel stagnant, they decide to detox for one week—no phones or laptops—and take up on Jack’s friend offer to stay at his grandfather’s restored cabin in upstate New York. Having no obligations and not being connected to technology feels great for the couple at first, as does watching the night sky and the “shooting stars” that might have hit Earth. When Su breaks their shared rule and secretly turns on her phone to check her messages, she realizes the planet might be under attack by alien critters — and that the pouffe pillow in the living room might be one of those critters. Jack and Su will have to quickly pick up survival skills and work on some good old-fashioned communication if they want to survive this attack. 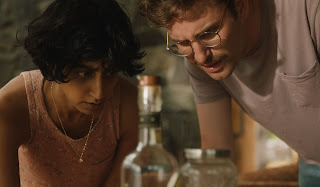 If the world had to end, John Reynolds and Sunita Mani are endearing company to end it with. As Jack and Su, their opposite personalities make a perfect clash of the laid-black and pragmatic, and yet neither one is cut out for country living. Little couple details in vulnerability, like Jack admitting he never knows when it’s time to clean the bathroom and Su confessing what she does with her disposable contact lenses, go a long way toward making them worth rooting for and fully transparent. Alex H. Fischer and Eleanor Wilson also flip the script when Su becomes the partner with more fortitude, as Jack even admits to not having many so-called manly skills, like basic plumbing. To see Su navigate from a woman whose biggest pet peeve is the closing of her ten Internet browser tabs to a more-unflappable survivor mutilating an alien ball of fluff is satisfying, and Mani pulls off the arc nicely. In his own right, Reynolds gives great night-terror face and does an on-target Sean Connery impression, complete with a pun. 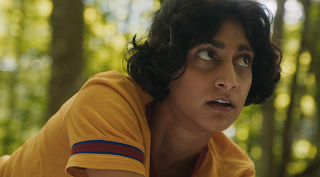 “Save Yourselves!” does lose a bit of its drive and energy as the film winds down, figuring out where to take the oblivious Jack and Su. Writer-directors Fischer and Wilson still recover, and nothing can erase all of the comically inspired bits before that. Any one-liner where the actors insert “pouffe” is bound to amuse (“The pouffe is in the cabin!” and “Pouffe on a roof!”). When Jack turns on his phone, too, he receives a voicemail that begins with a sci-fi radio static but hilariously just turns out to be a friend blending a smoothie. The film will feel like a personal attack when Jack and Su can barely fight their urge when wanting to send a text a message or Google something, but it is embarrassingly accurate. It’s like the filmmakers are just daring us not to turn our phones back on afterwards. Even when the film gets more violent with what these “Star Trek” Tribble cousins can actually do, it still retains a goofball spirit. Where “Save Yourselves!” ends up is absurd and not even exactly hopeful, but at least Jack and Su have inched a little closer to their planned self-improvement of being better (and more connected) people. Maybe they’ll even be ready to raise a child if they survive.