Ritual Island: "Death of Me" has a hook and then, well, dies 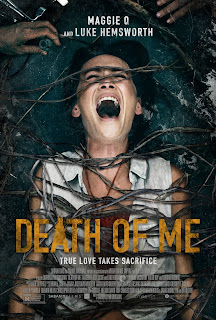 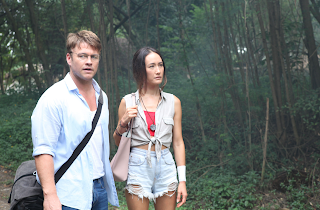 If “Rosemary’s Baby,” "The Wicker Man," and Wes Craven’s black-magic voodoo chiller “The Serpent and the Rainbow” were muddled together with “The Hangover”—hold the comedy—“Death of Me” might be the resulting potion. It’s not that those ingredients couldn’t work in tandem, but what director Darren Lynn Bousman (2018’s “St. Agatha") and a trio of screenwriters, Ari Margolis, James Morley III, and David Tish, concoct is a real misfire. After this mystery-horror effort presents a creepy-enough hook, "Death of Me" deflates, growing less interesting the deeper it gets into the weeds. 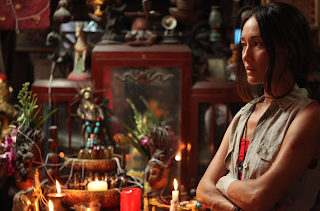 Vacationing on an island off the coast of Thailand, American travel reporter Neil (Luke Hemsworth) and wife Christine (Maggie Q) wake up hungover in their resort hotel room. They are both smudged with dirt and do not remember the last twelve hours. With the news forecasting a typhoon, even though the island hasn’t experienced a storm in 200 years, the couple hurries to evacuate on a ferry, but their passports and Christine’s cell phone have gone missing from their bags. In retracing their steps from the night before, Neil comes across photos, as well as a two-and-a-half hour video: they consume a hallucinatory drink at local bar, Christine is given a mysterious amulet, and then on the walk back to their villa, Neil chokes Christine to death during sex and buries her in the ground. That explains the necklace and why Christine has bruises on her neck. Discovering just why Christine is still alive, vomiting up dirt and grass, and having weird hallucinations will be the death of them both. 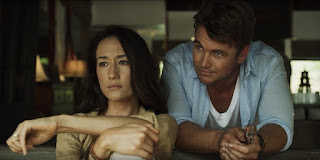 For a full 17 minutes, before a “WTF?!” shot smash cuts to the title card, “Death of Me” feels like a solidly engaging episode from “Tales from the Crypt.” A couple of Westerners trying to get to the bottom of their drunken night, even if it kills them, should be enough. Pretty much everything after that extended opening sequence gets further and further away from the intriguing hook, which gets sent down the tubes. All of this meandering and wheel-spinning, including the couple interrogating locals about the origins of the amulet that somehow keeps Christine safe, then leads to a series of questions that will get standard answers. What festival are the islanders about to celebrate? Why do they seem to be celebrating Christine? The proceedings aren’t much different from other horror movies where tourists on foreign soil begin to fear the islanders and their sinister intentions. Look to Joko Anwar's Indonesian knockout "Impetigore" from two months ago to see how it's done. Here, it all just comes off heedlessly xenophobic by making the South Pacific Island locals all insanely smiling monsters, and not in a way that’s critiquing xenophobia. 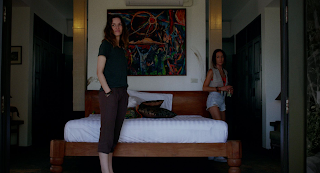 “Who did the guy in ‘The Wicker Man’ call?” Neil asks Christine when she tries using his phone to get reception. His wife very matter-of-factly replies, “No one. They burned him to death.” With a shout-out to an outlander horror classic like that, one would hope that “Death of Me”—as well as poor Neil and Christine—would catch up with the viewer. Maggie Q (2020's "Fantasy Island") gives the material her all, selling the confusion and frustration that Christine experiences as she may or may not be gaslit by the islanders. Q keeps the viewer invested as much as she can, but she also deserves better than a nice vacation for work.  Luke Hemsworth (not to be confused with brothers Chris or Liam)  is also fine as Neil when he isn’t looking like a deer caught in the headlights. The only other American on the island is a really nice Airbnb hostess, played by Alex Essoe (2020’s “Homewrecker”), so she probably cannot be trusted, either. 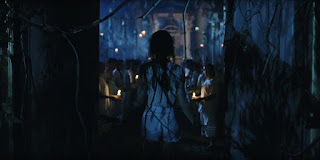 Director Darren Lynn Bousman did helm three of the "Saw" movies in the franchise, so with "Death of Me," there will be blood. A casual self-disembowelment with a gutting knife shocks, and a gnarly piece of business involving a needle and an eye is definitely not for the squeamish. Also of note: Mark Sayfritz’s doom-laden score, with chanting accompaniment, is eerie. “Death of Me” isn’t strange enough or ever too scary to make much of a mark. It just marks time.