“Paper Spiders” is a poignant, bittersweet slice-of-life about a child living with a parent whose mental faculties slowly give way to paranoid delusions. Co-written by director Inon Shampanier and Natalie Shampanier (Inon’s wife), this beautifully acted mother-daughter drama is neither a Lifetime melodrama nor a sentimental Hallmark card but rather perceptive as it is touchy in handling a psychotic disorder. Leavened with a healthy dose of natural humor, “Paper Spiders” stomps on your heart and then rebuilds it by the end.

Recently widowed New York mother Dawn Leady (Lili Taylor) isn’t ready to see her ambitious 17-year-old daughter Melanie (Stefania LaVie Owen) go off to college. They are inseparable, but Melanie is the salutatorian of her graduating class and dreams of attending her father’s alma mater, University of Southern California, with a scholarship in the fall. The day after they return home from a campus tour of USC, Dawn’s benign cautiousness gets out of hand after a verbal altercation with a new neighbor. Pretty soon, Dawn is completely convinced said neighbor is intimidating them and trying to break into their home. If Melanie didn’t already have enough on her plate and catch the eye of alcoholic rich kid Daniel (Ian Nelson), she must become the parent when her own mother shows major signs of a persecutory delusional disorder. 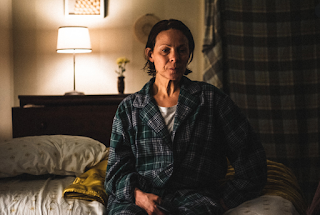 Though there may be more hard-hitting films about paranoia, “Paper Spiders” is more low-key and told on a human scale without any horror or hallucinatory tendencies. The film hinges on Dawn and Melanie Leary’s nuanced relationship, which rings painfully true because of the two demonstrative central performances. Without ever making a false note in managing the highs and lows of a character with paranoid delusions, character actress Lili Taylor gives a devastating, sublimely modulated performance as Dawn Leady. As great as Taylor is, the film really belongs to Stefania LaVie Owen (2019's "The Beach Bum"), who brings a poise and a wisdom that belies the inquisitive Melanie’s age. Rounding out the solid supporting cast are Max Casella, as Gary, a private detective Dawn hires to install cameras; David Rasche, as Dawn’s boss at a law firm; and Michael Cyril Creighton, as Mr. Wessler, Melanie’s ill-prepared guidance counselor who has to refer to medical books on his shelf.

Inon and Natalie Shampanier’s “Paper Spiders” comes from a personal place and that is always evident in the gravity and compassion brought to the film. The film never vilifies Dawn for her mental instability after the major loss in her life, but as Melanie comes to learn to care for her mother, it approaches Dawn with a level of patience and understanding. Rest assured, the title of the film does become clear by the end, conveying a feeling of progress over time, without being overtly spelled out. Notably, Inon Shampanier’s direction is assured but unshowy, and the film looks sharp, courtesy of cinematographer Zach Kuperstein (2016’s “The Eyes of My Mother”) shooting on location in Syracuse. “Paper Spiders” may wrap up things in a neater bow than preferred, but it still presents the tough choices when a child and parent must switch roles.

“Paper Spiders” (109 min.) was the opening night film at the Dances With Film Festival and currently does not have a release date.