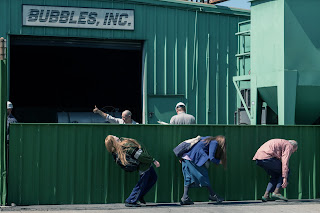 Since her feature debut with 2005’s “Me and You and Everyone We Know,” it seems cinephiles and critics run hot and cold with quirky indie darling Miranda July (2011’s “The Future”). Like her work or hate it, July has a distinct artistic voice as a filmmaker, and she could even convert a few new cult members with her third film. “Kajillionaire” is unique and offbeat, as one expects from July, but also unsuspectingly human and empathic. 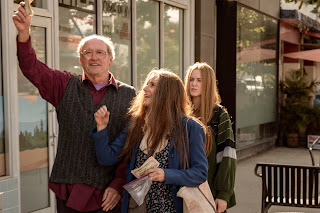 Evan Rachel Wood has the honor of playing a character with, among other attributes, one of the oddest names: Old Dolio. For the better part of her life, the 26-year-old has run low-level scams with Robert (Richard Jenkins) and Theresa (Debra Winger), her narcissistic parents, just to get by. It’s a strange upbringing, but this is the only life Old Dolio has ever known, and she has never had nurturing relationships with either one of her parents. So far removed from society, this family—the Dynes—lives in a cubicle-filled office space of a Bubbles, Inc. factory and they can’t even afford the rent on that. On a flight to New York from Los Angeles, the family sits next to a bubbly, talkative young woman named Melanie (Gina Rodriguez), who begins as a cog in their latest con in getting an insurance payout for a lost piece of luggage at the baggage claim. Melanie, though, ends up throwing the lives of these con artists off-balance when they aren’t experiencing the earthquakes of L.A. 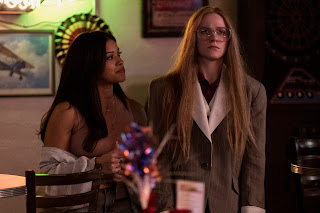 On the surface of what is essentially a grifter story about a life of desperation and a longing for human connection, “Kajillionaire” is filled with arch and amusingly absurdist details. A regular day for the Dynes involves a trip to the post office, where Old Dolio performs parkour to evade the cameras at the entrance. She unlocks a P.O. Box and sticks her arm all the way to the end in order to steal any packages she can feel in the other boxes; afterwards, they will sell whatever treasure they find for cash. In the factory where the Dynes live, soap bubbles will seep through the ceiling and down the walls every few hours, forcing the family to sop up their mess. Also, whenever the three of them must dodge the manager of the factory when they are late on rent, Old Dolio proves she has the most limber of backs when keeping low. Beyond what looks like a small-scale, quirk-forward take on “Ocean’s Eleven,” this is really about the transformative power of love once Melanie enters the Dynes’ lives. 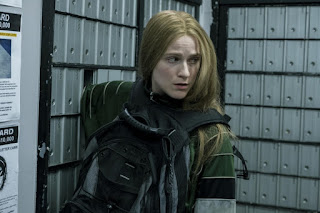 Completely losing herself to the point of looking like Avril Lavigne with long hair and baggy clothes—not to mention an unexpectedly monotone voice—Evan Rachel Wood is excellent. As Old Dolio, Wood is able to make her feel like a real, flesh-and-blood person and not just a construct full of eccentricities; the character is allergic to human touch until showing a yearning upon meeting Melanie and realizing that her in-name-only parents are toxic. Richard Jenkins and Debra Winger (who’s almost unrecognizable being made to look dowdy) are terrific as Robert and Theresa, parents who are dedicated to their cons but were never born to be parents. Gina Rodriguez is a vibrant, naturally gregarious presence as Melanie, the audience’s surrogate. Rodriguez not only has charisma for days but makes Melanie accessible and vital to grounding the heightened characters with whom she has surrounded herself. 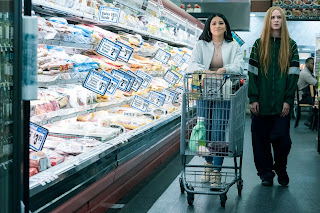 Miranda July displays a delicate touch with “Kajillionaire” without dodging the despair of living life on the fringe and receiving little affection. One wouldn’t have minded to sit longer with Old Dolio and Melanie, even beyond their poignant, gentle, hopeful, altogether lovely final scene together. These two wouldn’t even need more story because living with these interesting people is enough. Through all of the idiosyncrasies on display here, “Kajillionaire” is a true oddball of a gem with a warmth and kindness that sneaks up on you.
Grade: B +
Focus Features releases "Kajillionaire" (106 min.) September 25, 2020 in select theaters, followed by a Premium On Demand release October 16, 2020.