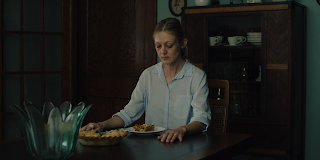 “The Swerve” is as raw and unnerving as watching someone have a complete mental breakdown. A story about anguish smothering and withering away every last ounce of life and hope could easily be a one-note, feel-bad bummer, but that never happens here. It's riveting to watch the dread accelerate and be served straight-up without a chaser to make its portrayal of mental decay more comfortable. Making his feature film debut, writer-director Dean Kapsalis draws the viewer in immediately with the demonstrative, fascinating face of character actor Azura Skye and never loses their attention. Finally given a lead performance, Skye digs deep and bravely finds something in herself beyond her endlessly watchable visage that gives this methodical, unsparing tragedy an unshakable power. If you are willing to go down this road, “The Swerve” unfolds like a punch to the gut.

It all starts with there being a mouse in the house that throws Holly’s (Azura Skye) life out of whack. Already, she lives a very modest married life with two teenage sons. Her husband Rob (Bryce Pinkham) manages a grocery store, and she teaches high school English. Holly barely feels noticed in her life and suffers from insomnia, but having a mouse possibly in her kitchen or under her bed doesn’t sit well with her, either. When she dutifully bakes an apple pie to take to her parents for a dinner and intervention, Holly gets chastised by in-and-out-of-rehab younger sister Claudia (Ashley Bell) after an incident from their childhood. This seethes Holly so much that she quietly sneaks out after dinner, leaving her husband and boys there. On the road, Holly gets passed by a carload of wild party boys. By morning, she may or may not have run them off the road to die. With everything triggering Holly’s mental state—and catching the eye of Paul (Zach Rand), one of her students who also works as a cashier at her husband’s grocery store—she can’t handle one more thing. 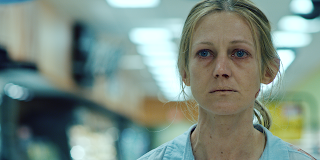 As disturbing as a horror film, "The Swerve" is more of a penetrating study in mental illness. Withdrawn and fragile yet sympathetic, Holly tries to do everything right and do something for everyone else, but aside from an underage student, no one seems to notice or care. When she finds herself well past the point of no return and unsure of whether her life is still a reality or full of hallucinations, the dark path she goes down poisons and pierces the heart. Appearing as if she hasn’t slept in weeks or months (and getting worse as the story progresses), Azura Skye is tremendous in one of this year’s most indelible performances. She is unvarnished in projecting longing and a pit of emptiness. The conclusion is seen coming—and yet we hope and pray things will turn out better—but in no way does the inevitability take away its upsetting impact and consequence. Even if Skye’s searing performance were the only thing to recommend it, “The Swerve” would still stun. It is quite the investment, and well worth it.

Epic Pictures released "The Swerve" (95 min.) on video on demand and digital platforms on September 22, 2020.