Don't Enter: "The Owners" a familiar if twisted and lurid home-invasion thriller 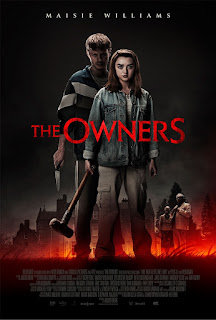 Young and desperate burglars get way in over their heads when thinking they have found the perfect score in a house, only to learn it won’t be an easy, in-and-out job. Stop if you feel like you have heard this well-worn premise of the tables being turned before. “The Owners” does sound like 2016’s intense home-invasion thriller “Don’t Breathe,” indeed, and even 2019’s darkly offbeat “Villains,” but it is actually based on a French graphic novel, Une Nuit de Pleine Lune, by Yves H. and Hermann. Even so, this British horror-thriller is still familiar, but a sick and twisted kicker on its own.

Mary (Maisie Williams) is just trying to get to work, only to realize that her loutish boyfriend, Nathan (Ian Kenny), has taken her car to case a house. She finds him with the dumpy yet relatively more-decent Terry (Andrew Ellis) and a new cohort, the wiry Gaz (Jake Curran), waiting in the English countryside overlooking the home of the old Dr. Richard Huggins (Sylvester McCoy) and wife Ellen (Rita Tushingham). Once the couple has left, Nathan and the boys go in, making Mary be the lookout. The safe in the basement won’t open when it turns out to not be electronic, so Nathan decides they will wait until the homeowners are home and forces his girlfriend to come inside. Richard and Ellen are not as helpless as Nathan and his crew expected, and they will just have to fumigate these pests.

The directorial debut of Julius Berg (who co-wrote the script with Matthieu Gompel), “The Owners” is tightly coiled and classy-looking as it is lurid and nasty. Like most thrillers, it is only as effective as its villain, and this one has two who are demented doozies. Sylvester McCoy and Rita Tushingham are both old pros, the former playing Dr. Huggins with a calm menace and the latter getting Ellen to switch between brittle and childlike and then angry and bonkers with a creepy moment involving dentures. On the flip side, the least grating and closest to a conscionable and root-worthy protagonist is Mary, newly pregnant right before entering a situation that will leave her shell-shocked and bloodied. Maisie Williams (HBO’s “Game of Thrones”) makes quite the impression as the spiky yet vulnerable Mary, who has a no-bull resolve every horror-movie heroine should have. The dynamics between some of the characters do deepen in dribs and drabs. For example, Dr. Huggins puts it together that he actually knows Terry (his mother is the housekeeper), despite the stocking worn over his face, and we come to learn that Terry had a former relationship with Mary’s sister who is no longer around.

“The Owners” is a sturdy, if fleeting, thrill that, aside from a couple of splatter moments, favors good, old-fashioned suspense. Director Julius Berg keeps the tension steady, aided by a pulse-pounding, techno-tinged score, even when the third act inexplicably shifts in aspect ratio (more of a sloppy, unnecessary flourish than a potent one). As the film drops a big bomb in the final five minutes, the intentions of the true antagonists are surely disturbing and yet raise more questions than Berg and Matthieu Gompel want to answer. It’s all a cruel coincidence that still would have happened, even had poor Mary just left Nathan and gone to work on time.