You Got a Friend in Him: "Rent-A-Pal" a sad, sinister, unsettling study in pre-Tinder loneliness 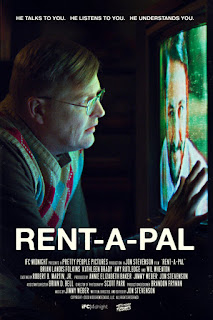 There have been horror movies about unconventional relationships, from cars (1983’s “Christine”) to dolls (1988’s “Child’s Play”), and now "your best friend" from a VHS tape can be added to the list. Jon Stevenson makes his writing-directing-editing debut with retro horror-tinged indie “Rent-A-Pal,” a simultaneously unsettling and heartbreaking character study in longing and loneliness, pre-Tinder, pre-“Black Mirror” and set in 1990. Unpleasant as it is compelling, this is a human tragedy without compromise and just enough empathy before the pivotal breaking point.

40-year-old Denver sadsack David (Brian Landis Folkins) works as a full-time caregiver to his dementia-stricken mother (Kathleen Brady), living in the basement and getting by on her social security. When he’s not feeding or bathing her, David is wrapped up in a video dating service called Video Rendezvous. He is desperate to find his soul mate, charging his credit card for every videotape he rents to find a hopeful girlfriend. With no luck for six months, David finally goes into the office to record a testimonial video of himself. On his way out in the bargain bin, he finds another tape called “Rent-A-Pal”; when popping it into his VCR at home, David finds comfort in Andy (Will Wheaton), the pre-recorded host who promises that they will be good friends. As David believes Andy to be a good listener and talking to him directly, they take up each other’s time, until David gets matched with sweet hospice caregiver Lisa (Amy Rutledge).

“Rent-A-Pal” could have gone any other way, but the path writer-director Jon Stevenson chooses is purposefully disturbing and impactful. Initially off-putting (and even prurient) as a protagonist to closely observe and identity with, David is a friendless bachelor who just wants to find a connection but begins to lose touch with reality. Brian Landis Folkins is deeply, emotionally tuned in to every nuance of David’s life, and up until a point, he is vitally sympathetic and vulnerable as schlubs go. Amy Rutledge is gentle and warm as Lisa, David’s one source of hope. Playing Andy, Will Wheaton excels all by himself as a creepy presence, belied by his chummy, clean-cut demeanor in a sweater vest and tie.

As much as David and Lisa would seem to be a weirdo romantic match on paper—they are both caregivers, one falling into taking care of his mother and the other making it more as a profession—their relationship just cannot last. The story is inevitably tragic in that way, and even when the violent climax reaches a heightened point—someone crawls through a spilled lasagna as if it were quicksand—it locates the only ending that feels right. The toll of caregiving for someone is felt, as is putting one’s entire being in a seemingly loyal friendship that doesn’t actually exist. As much as it needs to be, “Rent-A-Pal” is sinister, troubling, and downright sad.