Based on a revisionist mystery series of books by Nancy Springer, “Enola Holmes” is positioned as just the beginning for a potential franchise, and this is one of those times where that prospect actually sounds enticing. If you have made the connection with that familiar last name, you are indeed correct: Enola is the younger sister to private detective Sherlock Holmes. Based upon Springer’s “The Case of the Missing Marquess: An Enola Holmes Mystery,” the film acts as a splendidly entertaining introduction to another plucky member of the Holmes family. “Enola Holmes” is a total delight and so light on its feet that it would be a real mystery if one didn’t like it. 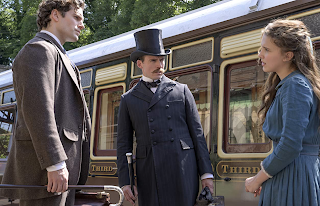 Never allowing the film to feel like a stuffy or lifeless period piece, Emmy-winning director Harry Bradbeer (who has helmed many an episode of “Fleabag”) sets a playful tone from the word go. Played by the poised Millie Bobby Brown, Enola breaks the fourth wall to tell us how her story began, while riding a bicycle (not one of her “core strengths”) down the English countryside. She happily lives in her home of Ferndell Hall with her mum, the forward-thinking Eudoria (Helena Bonham Carter), who homeschools and teaches her daughter everything from philosophy to tennis and jujitsu. Living up to her name by morning—it spells "alone" backwards—Enola wakes up on her 16th birthday to find that her mother has disappeared. Her two older brothers aren’t much help, particularly legal guardian Mycroft (Sam Claflin), who wants to send his sister to finishing school. To find her mother, Enola must escape herself to decipher clues and unscramble word games. Along Miss Holmes’ clothes-swapping adventure, she will end up inadvertently rescuing a runaway like herself, the Viscount Lord Tewksbury, Marquess of Basilwether (Louis Partridge), from a henchman in a bowl hat (Burn Gorman).

There are actually two solvable mysteries co-existing in the film, one of which slightly becomes more of an afterthought than the other. The one that takes precedence turns “Enola Holmes” into a rip-roaring, incident-heavy adventure. Selling the fourth-wall breaking and handling the quick-witted words of Jack Thorne’s script with aplomb, Millie Bobby Brown immediately finds herself in the good graces of the audience, making for a charming, intelligent, and spirited Enola Holmes. Had she not already stolen our hearts as Eleven in the ‘80s-set sci-fi series on Netflix “Stranger Things,” this would be her star-making performance, and yet, Brown still feels like a true find all over again. The supporting performances are no slouches, either, from a perfectly cast Helena Bonham Carter as the unorthodox matriarch, to a stoic yet lovely Henry Cavill playing the most handsome Sherlock Holmes, to a mustache-twirling Sam Claflin as Mycroft, the least loving of the Holmes brothers. Perhaps all of these characters will have even more to do in future adventures, particularly Susan Wokoma as Enola’s former jiujitsu trainer who also owns a tea shop, but for now, they revolve around Enola.

“You have to make some noise if you want to be heard,” a key figure in Enola’s life tells her. Those empowering words not only feel universal but particularly relevant and vital for young girls like Enola to hear. Allegedly in need of being made “more acceptable in society,” Enola is no debutante and refuses to follow anyone’s path but her own. She is not selfish, even if she has no desire to have a husband. Like the heroine herself, “Enola Holmes” is an infectious breath of fresh air. Lively in its pacing and exquisite in its production, this is a pleasing prelude to the young sleuth who has plenty of more mysteries to solve.
Grade: B +
Netflix released "Enola Holmes" (123 min.) for streaming on September 23, 2020.