Planned Trip: Predictable if brightly acted "Unpregnant" gets life from Richardson and Ferreira 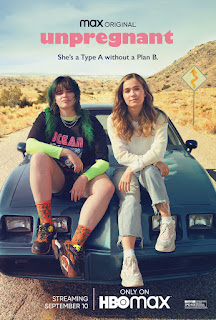 If there needed to be a more rompish, broadly appealing film about teen pregnancy this year than Eliza Hittman’s quietly powerful and clear-eyed indie “Never Rarely Sometimes Always,” then “Unpregnant” is a good-enough plan B. Based on the book by Jenni Hendricks and Ted Caplan, the film wants to handle sensitive subjects like abortion and bodily autonomy, while also celebrating reconciled female friendship. While director Rachel Lee Goldenberg (2020’s “Valley Girl”) could have refined a few tonal missteps in the script she co-wrote with authors Hendricks & Caplan—as well as writers Jennifer Kaytin Robinson & Bill Parker—“Unpregnant” ends up working due to two bright lead performances.

Bound for Brown University, popular Missouri 17-year-old Veronica Clarke (Haley Lu Richardson) defies statistics after lots of protected sex with her boyfriend—or so she thinks—by taking a pregnancy test and getting that dreaded “+” result. When the closest abortion clinic for young women under 18 years of age without a parent’s permission happens to be in Albuquerque, New Mexico, she budgets and plans the 14-hour drive. Without any other options, Veronica turns to her green-haired ex-best friend, Bailey Butler (Barbie Ferreira), to help her “take care of the situation” and away they go.

For a teen road dramedy that ends with an abortion rather than a final drive off a cliff, “Unpregnant” gets a lot of its personality from Haley Lu Richardson (2019’s “Five Feet Apart”) and Barbie Ferreira (HBO’s “Euphoria”). These actors make such a winning combination with a natural chemistry and history together; of course, these former friends are total opposites, one being a pragmatic go-getter and the other is an impulsive misfit. Still able to convince as a high school student and always enhancing a seemingly stock role, Richardson is effervescent and yet fully accessible as Veronica, who’s too preoccupied with keeping up appearances (she will snap a photo with an obligatory hashtag for Instagram on the road). A memorably fearless force on the HBO series “Euphoria,” Ferreira is indomitable as the punkish Bailey.

A generally predictable trajectory besides, the film doesn’t always go where one expects, even to its detriment. When a nice Texan couple (Breckin Meyer, Sugar Lynn Beard) at a carnival offers them a ride and later reveal themselves to be pro-life Christian kidnappers, this menacing, even wackily over-the-top detour feels jarringly divorced from the otherwise grounded tone. Knowing, one-and-done references to “Juno” and “Thelma & Louise” are welcome, however, and the supporting cast lends nice work. Giancarlo Esposito is lovely as always, giving pearls of wisdom as a limo driver who gives the girls a lift; Australian singer Betty Who proves her star magnetism as a badass race car-driving lesbian by whom Bailey is awestruck; and Mary McCormack has one affecting scene as Veronica’s mother. Uneven as the journey can sometimes be, “Unpregnant” is acerbically humored yet sweet, and all’s well that ends well.