War of the Scare-meisters: "Scare Me" a cleverly chatty fireside two-hander with an extra subversive layer 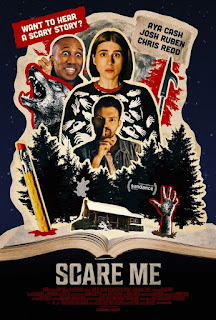 It’s a joke in itself when meta horror-comedy “Scare Me” smash cuts to its title card, illuminated in bold red letters, and jolts the audience with spine-tingling musical strings à la “Insidious.” Written and directed by Josh Ruben (who has created and starred in hundreds of CollegeHumor shorts), this cleverly knowing, humorously spiky two-hander enthralls like a piece of improv theater by cozy fireside. As a chatty lark with a bubbling tension, “Scare Me” celebrates the skill of campfire storytelling, while also exploring a writer’s creative process and hostile gender politics. 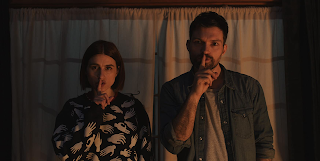 Off a plane from Los Angeles, 38-year-old aspiring writer and actor Fred Banks (Josh Ruben) retreats to a cabin in the Catskills to start writing his werewolf revenge tale. The next morning after a night of writer’s block, Fred runs into best-selling Brooklyn horror novelist Fanny Addie (Aya Cash), who can’t get away from him fast enough. That night during a power outage, Fanny actually ends up knocking on Fred’s door. They crack open some beers and decide to take turns telling and acting out scary stories to ride out the blackout. When they take a break to order food, a pizza delivery guy named Carlo (Chris Redd) joins in on the fun and then out comes the cocaine. Since Fanny is the professional and always writing down ideas in her notebook, she might be more of a master than Fred, which fuels his inadequacies that turn into resentment for Fanny’s success. Who will truly scare who? On the surface, “Scare Me” amounts to strangers amusing each other and spinning a couple of horror yarns by a crackling fire in a cabin. Like Fanny encouraging amateur Fred to use details and let his imagination run wild, writer-director-actor Josh Ruben uses his own budgetary constraints to get creative through sound design and a few practical effects to support the characters' voices. Fiction and reality are blurred, as Fred and Fanny’s scary stories are fleetingly brought to life. During Fred’s werewolf tale made up on the fly, a spooky silhouette of a furry beast appears on the wall and then a bloodied claw emerges from the darkness. Or, when Fanny and Carlo reenact her best-seller “Venus” where a vampire is involved, vampire fangs appear in her mouth out of nowhere. How a satanic musical is executed for the last scary story just needs to be seen and heard.

Josh Ruben and Aya Cash (FX’s “You’re the Worst”) get to use the confined space as an acting playground, and they play hard. Ruben sheds different facets of the emasculated Fred, making the character's envy and insecurities recognizably human, while also showcasing his comic expressiveness as a goofball impersonator. As the hyper-critical Fanny, Cash is brilliantly acerbic and beguiling before exposing her own vulnerability and fears. As storytellers, the viewer hangs on the actors’ every word and expression. As ventriloquists of sound effects and impressionists of the Crypt Keeper, Gollum, an undead Shih Tzu, and Jack Torrance from “The Shining,” they are damn impressive. And, though he’s a third party to the central duo, Chris Redd (“Saturday Night Live”) adds another jolt of energy as the affable Carlo, who works for “Overlook Mountain Pizza Company” (wink wink). Finally, though never getting in on the action in the cabin herself, Rebecca Drysdale is also very funny as a Chatty-Cathy rideshare driver in the bookending scenes. 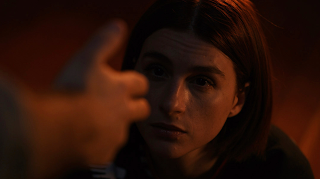 “If this were a movie, I’d dolly in real slow right about now,” Fanny wryly adds as her scary tale about a lazy-eyed Russian grandfather and his baby-voiced granddaughter reaches its tense zenith. A chamber piece hinging on two actors strutting their stuff, “Scare Me” begins as a fun-and-games one-upmanship before the power dynamic gradually turns toxic. The film is a macabre hoot with just enough savvy horror movie shout-outs (and apologies to the huge fans of "Silver Bullet"), until its shaggy-dog intentions reveal a darker and more subversive layer closer to a scarier reality. “Scare Me” might feel a little slight for a full feature, like how Fanny schools Fred on a germ of an idea not counting as a story, but game actors, resourcefulness and creepy suggestion go a long way in diverting and unsettling an audience.