Horror History: "Antebellum" an audacious, unsettling social thriller with something to say 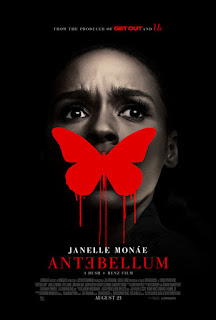 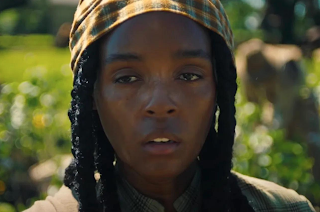 The horror film can be the most accessible vessel for commenting on society, especially when the social issue is something as uncomfortable as racism. Like Jordan Peele’s “Get Out” by way of M. Night Shyamalan’s “The Village,” Gerard Bush and Christopher Renz’s “Antebellum” holds a mirror up from the Civil War to the 21st century. In that mirror reveals how time has gone backwards and become almost blurred, racism and evil still being very much alive and hidden in plain sight. That might sound like an obvious notion, but it’s clearly necessary to keep reiterating, and “Antebellum” is not afraid to gamble on how to approach such a daring vision with searing social commentary and provocative entertainment. 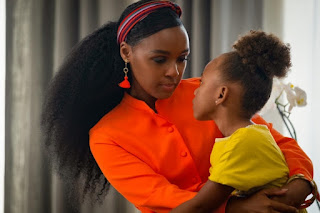 For good reason that won’t be clear at first, “Antebellum” begins with William Faulkner’s quote, “The Past is never dead. It’s not even past.” From there, Civil War-era slave Eden (Janelle Monáe) is trying to find just the right time to escape from a cotton plantation in Louisiana. By day, she’s forced to pick cotton in silence. By night, she has to sexually satisfy her “master.” On a contemporary timeline is successful author, activist, and sociologist Veronica Henley (also played by Janelle Monáe). She lives in a gorgeous townhome with a gorgeous husband and daughter, but Veronica still faces micro-aggressions and condescension when always in the public eye and making TV appearances. When Veronica goes away for a promotional tour in Louisiana, the present-day begins to bleeds into the past, but how and why? Is time travel involved? Mum’s the word. 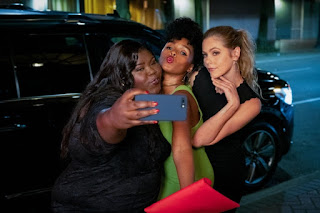 Making their feature writing-directing bow, filmmakers Gerard Bush and Christopher Renz forge a duplicitous yet extremely potent path to confront modern race relations and the stain in American history. The first forty minutes of “Antebellum” precariously walk a line of “slavesploitation” and responsibly depicting the ugly brutality of Black bodies. It’s important to stick with the film, even during this lengthy opening that is no less tough to endure than 2013’s unflinching “12 Years of Slave,” because a narrative switch comes soon enough. As the film resets with a seemingly different time period, a sinister portent still lurks in Veronica's sleek modern world, which will surely collide with Eden's antebellum years. When they are woven together, the connection is not just a cleverly contrived twist for the sake of being a gimmick.

Tipping its hand just enough in the early going, “Antebellum” nevertheless disorients and keeps one guessing. Bush and Renz prove themselves adept storytellers, as well as expert visual craftsmen bursting out of the gate. An impressive tracking shot—who isn’t a sucker for a single take, or at least an illusionary single take?—takes the viewer across the grounds of the plantation full of Confederate soldiers and slaves. These filmmakers display a panache and thoughtfulness behind their framing that never comes off like showing off but actually serves the racially charged story. Take for instance the way the white servers are framed in a simple dinner scene; their faces are as invisible to our eye as many people of color have felt in their lives. Director of photography Pedro Luque Briozzo (2016’s “Don’t Breathe”) packs many a frame with startling and incendiary imagery, including a little white girl dragging a doll by its neck like a lynched slave or Eden marching away from a crematorium with a lit torch. 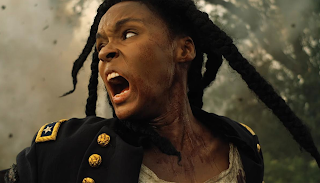 Janelle Monáe (2016's "Hidden Figures") clearly cemented herself as a magnetic performer in supporting roles that she was due for a leading role in a major release. In both roles, Monáe is captivating, conveying the despondent terror and inner strength that Eden and Veronica equally experience and use to their advantage. A major standout in the modern scenes, Gabourey Sidibe is a blast of energy and adds spark whenever she’s on screen as Veronica’s infectiously direct and whip-smart friend Dawn. Kiersey Clemons is sadly underused, but despite her intentionally swift exit as pregnant slave Eden tries helping, she still makes enough of an impression. Dialed up to 100 with a “I do declare”-type Southern accent, Jenna Malone is deliciously diabolical as plantation mistress Elizabeth, who—hoo boy!—gets her comeuppance. 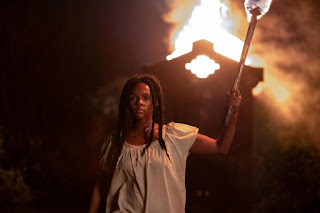 Thank the movie heavens for Lionsgate proudly taking a chance on something as audacious, confrontational, and sure to be divisive as “Antebellum.” Ordinarily, a more subtle hand would do the trick, but Gerard Bush and Christopher Renz are blunt in their point-making. That bold approach works for this kind of material, and Bush and Renz pay everything off in a brutal, grandly satisfying, and ultimately powerful finish in terms of Eden's bloodlust for slave owners. Fortunately, there is a release at the end of all the cruelty this woman experiences, and still, the unsettling implication is that the more things change, the more they stay the same.