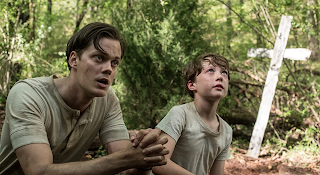 Grim all the time but purposefully so, “The Devil All the Time” is a sordid, oft-brutal Southern Gothic tale about the evil among us. Based on Donald Ray Pollock’s 2011 novel of the same name, the film is a sprawling tapestry with an overflowing ensemble of characters whose lives fatefully converge during three time periods between 1945 and 1965 in Knockemstiff, Ohio, and Coal Creek, West Virginia. Writer-director Antonio Campos and co-writer Paulo Campos (Antonio’s brother) manage to get their arms around a lot in what is essentially a story of fate across multiple generations, and while it would seem to have pulpy, over-the-top trappings, “The Devil All the Time” is still bleaker than bleak and, more importantly, quite engrossing. 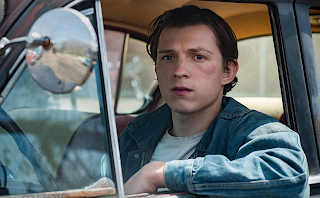 Author Donald Ray Pollock soothingly narrates the film, set in a fatalistic world of religious zeal and sin, corruption, death, lust, and the darkest and saddest corners of humanity. (Though narration can often be a crutch, Pollock’s omniscient and very novelistic narration is matter-of-fact, sometimes sardonic, and even prescient.) After serving in WWII, U.S. Marine Willard Russell (Bill Skarsgård) returns home to Coal Creek, but not before meeting and falling in love with a waitress (Haley Bennett), his future wife. After both of his parents die—one by cancer, the other by suicide—son Arvin (Tom Holland) is orphaned and raised by his grandmother (Kristin Griffith), as is Lenora (Eliza Scanlen), whose mother Helen (Mia Wasikowska) was killed by Lenora’s preacher father (Harry Melling). Also in the mix: sociopathic photographer Carl (Jason Clarke) and wife Sandy (Riley Keough), who pick up male hitchhikers, mostly soldiers, and then kill them to photograph Sandy posing with their bodies; corrupt sheriff Lee Bodecker (Sebastian Stan), Sandy’s older brother, is the one who finds Willard’s body; and the new local preacher, Reverend Preston Teagardin (Robert Pattinson), takes too much of a liking to the pious Lenora. 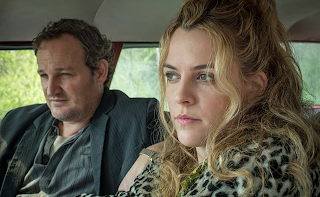 “The Devil All the Time” might seem overstuffed to death by that long-winded description, but writer-director Antonio Campos rather seamlessly weaves between the different characters, not unlike a Robert Altman mosaic. Nearly bursting at the seams with a stacked roster of talent, the film somehow allows every actor a moment to add color and make a mark. Remember, there are no small parts, and the actors are not small, either. As the initial protagonist of the piece, Bill Skarsgård (2019's "Villains") brings a haunted humanity to his traumatized war vet. Tom Holland (2019's "Spider-Man: Far From Home") is afforded a substantial yet internal role outside of the Marvel Cinematic Universe as Arvin, the only remotely honorable character, full of pent-up anger fueled by all of life’s losses. Eliza Scanlen (2020’s “Babyteeth”) also poignantly makes a lasting impression in a short amount of time as Lenora, a young woman about to confront her own faith when meeting Robert Pattinson’s lecherous hypocrite of a preacher. Pattinson surely goes the go-big-or-go-home route with a thick Southern drawl, but he sinks his teeth into the part and cuts a memorably vile human monster. Also, Riley Keough (2020's "The Lodge") finds interesting shading in Sandy, a wide-eyed waitress heavily influenced by a sinister Jason Clarke’s Carl to pose as kinky bait for their victims. 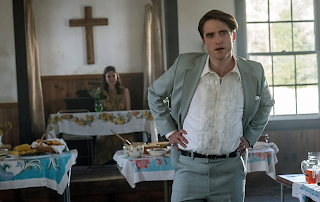 While those who aren’t long for this dark, ugly world will still be searching for a grandstanding point by the conclusion, the pieces do eventually collide out of happenstance. The bigger picture is that everyone enters the heart of darkness in some form or another, whether they inherit it, lose their way, or become corruptible. Tough, to be sure, “The Devil All the Time” nevertheless remains an haunting, uncompromising experience.
Grade: B +
Netflix released "The Devil All the Time" (138 min.) for streaming on September 16, 2020.