Back for More Blood: "The Babysitter: Killer Queen" more of the same but still fun, wildly bloody, and stylized as hell 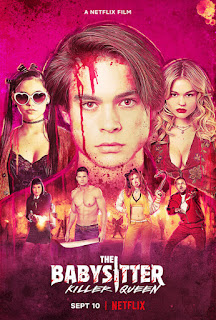 2017’s McG-directed comic horror romp “The Babysitter” more than satisfied as a one-off, but it was enough of a Netflix hit to spawn a sequel almost three years later. Writer-director McG is at the helm again, and he and co-writers Dan Lagana and Brad Morris & Jimmy Warden (taking over for one Brian Duffield) stick to the formula of the first film, while doubling down on the sophomoric comedy and gleefully gratuitous gore gags. Opting to go a little bigger and get out of the suburbs, “The Babysitter: Killer Queen” is more of the same, but it’s still fun, playful, and stylized as hell.

Two years after Cole (Judah Lewis) was nearly killed by his awesome babysitter Bee (Samara Weaving) and her blood cult, everyone treats him like Sarah Connor when nobody believed her that robots were real. Bee’s body was never found, and Cole, constantly in fear that she could come back, also has to adjust to a different kind of hell — high school. Realizing his parents (Leslie Bibb, Ken Marino) plan on sending him to a psychiatric academy, Cole ditches with best friend, neighbor, and longtime crush Melanie (Emily Alyn Lind). She invites him to the lake for the weekend with her dingbat boyfriend and two friends, but the party ends pretty quickly when the blood cult that Cole thought he outsmarted and defeated returns from the dead.

Juvenile but energetic and sinfully amusing most of the time, “The Babysitter: Killer Queen” never ceases to entertain. Director McG is not one to rein in his colorfully slick, in-your-face style, so if the flashes of text appearing on the screen didn’t work for one before, they definitely won’t work this time. There’s also a pleasing upgrade in scale, cinematographer Scott Henriksen bringing a nice atmosphere with the lakeside mountains in the moonlight. Some of the jokey humor feels a little strained—mostly thanks to Melanie’s Joe Exotic-lookalike stoner father (Chris Wylde), who gets a name (Juan) this time rather than just being credited as “Melanie’s Annoying Dad”—but the proceedings are so zippy and wildly bloody that it’s easy to forget about which of the one-liners aren’t quite landing.

If one took to the first film, it’s a treat to see the charming Judah Lewis (2019's "I See You"), as Coley, and the same ensemble back for a return engagement. As Melanie, the magnetic Emily Alyn Lind (2019’s “Doctor Sleep”), who has somehow blossomed into Chloë Grace Moretz and Samara Weaving since the last movie, walks a razor’s edge between being sweet and then unsuspectingly formidable, not unlike Samara Weaving herself. As boob-exploding cheerleader Allison, shirtless-for-no-reason psycho Max, death-obsessed Sonya, and always-in-the-splash-zone John, Bella Thorne, Robbie Amell, Hana Mae Lee, and Andrew Bachelor return and run full-tilt with their ridiculous characters, who all get quick backstory profiles. Bachelor's John, this time, gets one of the wittier lines, commenting on how it is “some post-Jordan Peele era horror movie progress” that he didn’t die first. Leslie Bibb literally gets to nag her husband and stay home to have dinner made, while Ken Marino’s dad shtick gets an uptick in screen time, and not always for the better. Newcomer Jenna Ortega, a standout in Netflix series “You,” proves herself to be a big talent and star in the making. As guarded, rebellious transfer student and juvenile delinquent Phoebe, Ortega is a spitfire, getting to be quick-witted, tough and vulnerable, and at one point even having the pleasure to make a reference to "Pee-wee's Big Adventure."

As sequels go, this one might be missing a sliver of the sweet heart that the first half of “The Babysitter” had in setting up the friendship between Samara Weaving’s charismatic Bee and Cole. And yet, without giving away some of this movie’s late surprises, there is a certain sweetness that comes into play. A kung fu video game-style fight and a disco dance to Sugar Hill Gang’s hip-hop anthem “Apache” somehow find their way into “The Babysitter: Killer Queen,” but so it goes with this go-for-broke, decapitation-happy goof.